The dating world is a tricky, tricky place to be. Wrong matches, awful dates, heartbreaks, ghosting – the possibilities are endless!

So what if… your grandmother sets you up with some eligible bachelors? Does that sound like a good plan to you? Or would you rather meet someone the old fashion way – no matter how long it takes? 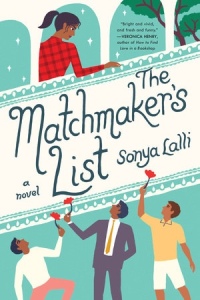 One devoted modern girl + a meddlesome, traditional grandmother = a heartwarming multicultural romantic comedy about finding love where you least expect it.

Raina Anand may have finally given in to family pressure and agreed to let her grandmother play matchmaker, but that doesn’t mean she has to like it–or that she has to play by the rules. Nani always took Raina’s side when she tried to push past the traditional expectations of their tight-knit Indian-immigrant community, but now she’s ambushing Raina with a list of suitable bachelors. Is it too much to ask for a little space? Besides, what Nani doesn’t know won’t hurt her…

As Raina’s life spirals into a parade of Nani-approved bachelors and disastrous blind dates, she must find a way out of this modern-day arranged-marriage trap without shattering her beloved grandmother’s dreams. (Penguinrandomhouse.com)

This was a heartwarming read! Raina is a very relatable character, although, there were moments where I got frustrated with her and her actions, but – I had to take a step back and put myself in her shoes. If i had my family pressuring me about marriage constantly, and had my grandma set me up with dates with random men… I’d be a little bit stressed out too!

One of her decisions though…I thought was way out of line. I think it could have been handled differently, but maybe this is what makes Raina a real, raw character throughout the book? It’s hard to truly speak on this topic without spoiling!

It was so refreshing to read a story written by a Canadian, set in Canada, more specifically – Toronto! My birth place! It was really fun reading the story and recognizing some of the places Raina would mention.

Overall, this was a cute story to read, and in some ways, even inspiring. Inspiring in the way that it showed that being yourself, despite what surrounds you, is the most important thing.

I was very lucky to not only read the book thanks to Penguin Random House Canada, but also to interview Sonya Lalli herself! Check it out below:

Hands down, Jhumpa Lahiri. She wrote The Namesake, my all-time favourite book (among many other wonderful books!)

2. Favourite book or genre to read?

Is book club fiction a genre? I read all sorts of books, but I suppose I usually tend to pick book that fall in that sweet spot between literary and commercial. So the type that are perfect for book clubs.

3. Do you have a go-to book recommendation?

Lately, it’s been Little Fires Everywhere by Celeste Ng. I read it last summer and still find myself thinking about the characters.

4. If you could inhabit one fictional character’s life for a day, who would that be?

Hermione Granger. Who of us doesn’t want to be her…

5. When was the moment you realized that you loved literature?

I don’t think there was a particular moment. Like many book lovers, I’ve been reading since before I can remember. My mom is the one who really got me interested. She was a huge reader herself, and bought me all the classics and always had the time to take me to the library or book store and read to me.

6. What made you want to be a writer?

I always loved creative writing, but it wasn’t until I had the idea for The Matchmaker’s List  that I was really committed to trying to be a ‘writer’ of a full on book. Raina’s story just kept coming to me, and deep down inside I really wanted to try and tell it.

7.  You studied law in Saskatchewan and in New York, but pursued creative writing after. What made you change your field of study?

That’s a difficult question. I set out to study publishing and creative writing because I had had the idea for The Matchmaker’s List and wanted to commit to the idea of writing it. However, when I left law, at the time I didn’t know I wasn’t going to return. I had initially thought of the change as temporary.

I was twenty-five, done university, and single, and I remember starting to get these looks from a few ‘aunties’ like they were assessing my eligibility. Everything just kind of flowed from there!

9. What made you choose to write a romance?

Even though I read across genres, I had never fully thought about what kind of genre I was writing in. When I started learning more about publishing and writing, I realized that this story was essentially a romance/ romantic comedy and so it took . It makes complete sense, though. I’ve always been such a sucker for a good romance.

10. I find Raina Anand to be a very interesting, strong character – her grandmother too! Who were they based off of? Did you go through the “bachelor” experience yourself?

Thank you! Raina is a hodgepodge of various women in my life (all very strong),  but Nani is basically the same person as my real-life Nani. One of my favourite parts of the book is their relationship, and it reflects the very close, loving relationship I’m lucky to share with my Nani.

11. What do you think of the “bachelor/bachelorette” dating style? Do you think it could work? Or should people get out there and meet someone the old fashioned way?

I think everyone has their own approach to love, dating and marriage, and they should be true to themselves. I don’t the method matters.

12. Is writing something you’re looking to do as a profession? Do you miss law?

I’m not sure what the future has in store longterm for my writing, but I work full-time in publishing now so no matter what happens, I’m lucky that I’ll get to work with books every day. I do miss the law, but I’m very happy with where I am right now.

13. On that note, do you plan on writing a second novel soon?

I’m working on one as we speak, actually! It doesn’t have a confirmed title yet, but it’ll be a standalone novel in a similar genre with all new characters. It’s scheduled to come out in 2020.

14. Do you have any advice for young writers out there?

Read as much as you can, and be sure try a wide variety of books and authors. Keep a running list of what you like and what you don’t like, or when you admire a certain style, turn of phrase or theme. You’ll learn a lot and it’ll be a great source of inspiration.

Thanks so much for having me and reading The Matchmaker’s List!

Thank you, Sonya Lalli, for coming on RWS to chat with me!

THE MATCHMAKER’S LIST is now available in stores everywhere!